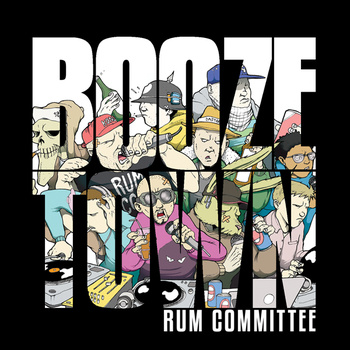 The debut album from Rum Committee

There are some who say that heavy drinking is not big or clever. There are others – Ernest Hemingway, for example – who’d argue that it is very big and clever indeed. We introduce the latest exhibit to support the latter thinking, Boozetown, the debut album from Brighton’s Rum Committee – MCs TC Johnston, Prince Kong, Gizmo and Captain Bukioe, singer Rag ‘n’Bonez Man, Producers Sherlock Bones, Direct, Kid Danger, Dan Dastard and DJ Choice.
Boozetown is not just an album – it’s a guided tour of the underbelly of a city, an increasingly inebriated lurch through Brighton’s taverns and fleshpots towards the cold light of dawn, in an unfamiliar place of brawling and bonhomie, of shotgunning bottles on the beach and taxis refusing to take your custom. Album opener Boozetown is an eerie, foreboding premonition of what you can expect from the night ahead, that’ll leave you unsure as to whether you should dive head-first into the city and all it contains, or get on the first train and high-tail it out of there. And then you’re off into rowdy speakeasies, where the soundtrack is that of party bangers and hardcore headcrackers like 50 50, Committee Shindig, F**k Up The Party and Gritty Committee. But when you get to the solemn, darkly introspective Pen Clenchers, the vibe suddenly switches, and all of a sudden you’ve rocked up in an after-hours club, drinking just to keep drinking, running out of hours, all to a smoky jazz soundtrack. As if to remind you that that last double rum was a bad idea, Outside The Window flips the script again, being a sobering cautionary tale of what happens when you let the booze get the best of you. But there’s still time for a grand finale, a rambunctious last toast to the glories of the night with the blowsy Yudunwanadrink. 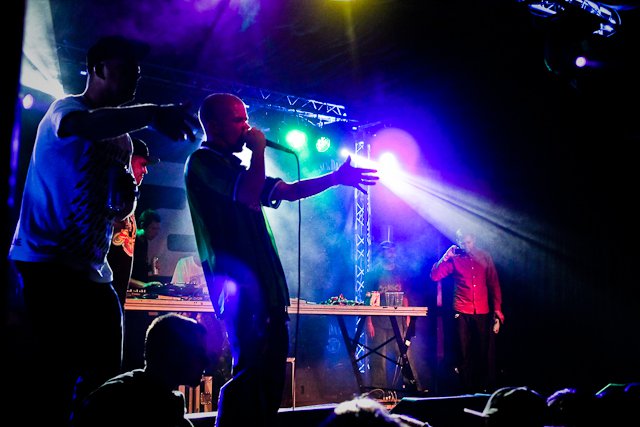 Rum Committee have created an alternative, slightly skewed reality for the south coast’s own Sin City, with its own sound and language, which is part battle rapper (Kong, Gizmo and TC are all rap battle veterans – the crew that spits bars together, hits bars together, after all) – and part wise-arse 1950s hoodlum, over corpulent breaks that throw in licks of heavy jazz, ragtime, dancehall, ska, blues, torch songs… Whatever fits. And across 14 faultless tracks, it always fits. It’s 18 years since US hip-hop had its first concise, cohesive, filler-free booze-rap classic in the shape of Tha Alkaholiks’ 21 And Over – now, in Boozetown, UK hip-hop finally has its equivalent. It’s a binge of banging beats, bruising bars, bravado and bacchanalia – and beautiful, beautiful booze by the beach.
Brighton is 54 miles from London as the crow flies. But Boozetown? A million miles away and more, brother.